Ngorongoro Conservation area, the Crater is one of the prehistoric sites in the world where the fossils discovered are said to be evidence of the human species as well as human footprint also discovered there. Apart from that, there is the presence of  Shifted sand, Lake Magadi where it’s a shallow soda lake and consist of a high number of pink flamingo, Olduvai Gorge, and a Masai village

After early morning breakfast, you will leave your hotel at Arusha heading towards Ngorongoro Crater, from Arusha to Ngorongoro Crater takes 2:40 hours (154.5 km) drive. Ngorongoro Crater is famous as the world’s largest inactive, unbroken and unfilled volcanic caldera among the seven natural world wonders. Here you will have not less than six hours of game drive (lunch included) and you will have a chance to see many animals at once inside the Crater except a giraffe, a fact that they can’t enter as the sides are too steep for them to walk down. Still, you will be able to see them around the crater.

After enjoying a great game drive at Ngorongoro Crater, late evening you will exit the park back to Arusha for dinner and overnight.

Going down into the Crater is a large additional expense from the Conservation area fee. The government has implemented this cost to preserve the natural state of the land, the environment, and minimize large numbers of tourists visiting and travelling in the area. Expensive perhaps, but consider this an incredible experience of a lifetime!

Your ticket for the: Ngorongoro Crater Day Trip

USD
Chat with us!
Start a Conversation
Hi! Chat with us on WhatsApp
We usually reply in a few minutes 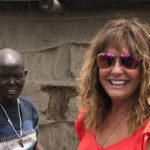 Sue Kitsch
Customer Executive
Can I help you?